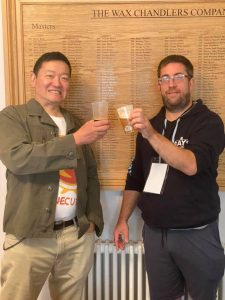 We had been running fortnightly ‘happy hours’ on Zoom for over a year, and had held several online tasting events in partnership with different craft breweries across England, so felt that the time was ripe for something more – our first in-person social! The easy option would have been to hire out a pub or bar and ask people to come along, but we felt that the first meeting needed to be something special for our members. Something to celebrate the end of lockdown, and the first time we had the opportunity to share a drink without involving a computer!

One of the most wonderful thing about Freemasonry is the variety of people you meet within it, and we were no different in having an amazing pool of volunteers ready to help out. W Bro Stanley Liu LGR, who is also the Beadle of Wax Chandlers’ Hall, threw open his doors and welcomed us in. Bro Gawain Cox, founder and co-owner of Pinnora Brewing, offered to brew three special beers just for the event.

Following a poll of our members as to their preferred beer styles, Bro Gawain soon began brewing ‘9 pm Toast’, an imperial stout named to commemorate the original MCBS meetings, ‘Lesser Light’, a pale ale named in honour of Wax Chandlers’, and ‘Sunken Dreams’, a double New England-style IPA whose name is a cryptic reference to the location of Freemasons Hall according to popular geolocation service ‘What3Words’.

After weeks of planning, discussing, adapting plans, organising logistics (have you ever tried getting beer kegs through central London?) on the evening of August 28th, the event began. Sixty Brethren from across the country met at Wax Chandlers’ to meet in harmony, and raise a glass or three together. Of course, it couldn’t be a Masonic event without a raffle – over £500 was raised for the Campaign Against Living Miserably, a men’s mental health charity. As the evening wound on, we retired to a local pub which was booked out for our use. It may not have been a tyled Festive Board, but it was the first chance many of us had had to break bread with fellow Masons in nearly a year and a half.

It was a thoroughly enjoyable night, and a great opportunity to put to practical test some of the ideas we’d had for the Horus Festive Boards, and the online booking systems etc we plan on using to make life just a little easier for the Secretary and Treasurer.

More articles from this issue